Two teams of astronomers have used data from NASA's Chandra X-ray Observatory and other telescopes to map the distribution of dark matter in a galaxy cluster known as Abell 383, which is located about 2.3 billion light years from Earth. Not only were they able to find where the dark matter lies in the two dimensions across the sky, they were also able to determine how the dark matter is distributed along the line of sight. 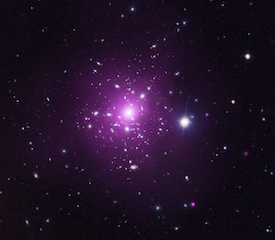 One of the teams - DARK-affiliated scientist and former DARK post doc Marceau Limousin (Laboratoire d’Astro-physique de Marseille) and former DARK post doc Andrea Morandi (Tel Aviv University) - concluded that the increased concentration of the dark matter toward the center of the cluster is in agreement with most theoretical simulations. Their lensing data came from Hubble Space Telescope (HST) images.

The other team, led by Andrew Newman of the California Institute of Technology and Tommaso Treu of University of California at Santa Barbara, used lensing data from the HST and the Japanese telescope Subaru, but added Keck observations to measure the velocities of stars in the galaxy in the center of the cluster, allowing for a direct estimate of the amount of matter there. They found evidence that the amount of dark matter is not peaked as dramatically toward the center as the standard cold dark matter model predicts. Their paper describes this as being the "most robust case yet" made for such a discrepancy with the theory.

The contrasting conclusions reached by the two teams most likely stem from differences in the data sets and the detailed mathematical modeling used.  As is often the case with cutting-edge and complex results, further work will be needed to resolve the discrepancy between the two teams. In view of the importance of resolving the dark matter mystery, there will undoubtedly be much more research into Abell 383 and other objects like it in the months and years to come.