The Hubble Space Telescope has broken the record in the quest to find the furthest supernova of the type used to measure cosmic distances. This supernova exploded more than 10 billion years ago, at a time the Universe was in its early formative years and stars were being born at a rapid rate. 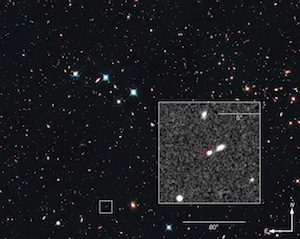 This image reveals the sky around the supernova, known as SN UDS10Wil, which is shown inset within its host galaxy. Credit: NASA, ESA, and Z. Levay (STScI)

The discovery was part of a three-year Hubble program called the CANDELS+CLASH Supernova Project, begun in 2010 [2]. This program aimed to survey faraway Type Ia supernovae to determine their distances and see if their behaviour has changed over the 13.8 billion years since the Big Bang, using the sharpness and versatility of Hubble’s Wide Field Camera 3.

So far, CANDELS+CLASH has uncovered more than 100 supernovae of all types that exploded from 2.4 to over 10 billion years ago. The team has identified eight of these discoveries as Type Ia supernovae that exploded more than 9 billion years ago — including this new record-breaker, which, although only four percent older than the previous record holder, pushes the record roughly 350 million years further back in time. Finding remote supernovae opens up the possibility to measure the Universe’s accelerating expansion due to dark energy.

"The CANDELS+CLASH Supernova Project is at the forefront of supernova cosmology. It was very exciting to be working directly with the team at The Space Telescope in Maryland as these results came in...

DARK PhD student Teddy F. Fredriksen and his supervisor, Professor Jens Hjorth are both part of the team making the discovery. Teddy recently spent 6 months in the US working with the group. The DARK team contirbuted significantly to the work by measuring the redshift of the supernova's host galaxy using X-shooter spectrograph at ESO's Very Large Telescope.

The team’s results will appear in the 10 May 2013 issue of The Astrophysical Journal.