Congratulations to Asger Grønnow who successfully defended his Master’s thesis Tuesday 16 December 2014. Asger has been working on a project with the title ''Mergers produce outliers from the fundamental metallicity relation''. 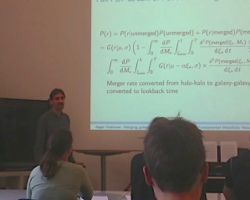 During a merger between spiral galaxies, the primary galaxy undergoes a period of strong infall of gas towards the center. As the disks typically have metallicity gradients with the metallicity decreasing exponentially with radius, this infall dilutes the central gas metallicity. So far this effect has been studied through samples of galaxy pairs and simulations of merging galaxies. In this thesis I examine the effect mergers have on metallicity in a new way based on the asymmetry of the scatter of the Fundamental Metallicity Relation (FMR), which relates the gas metallicity, stellar mass and star formation rate of galaxies. Selecting a sample of ∼ 170,000 galaxies at z ∼ 0.1 from the Sloan Digital Sky Survey (SDSS), I fit an FMR and compute the residual metallicities. I find an overabundance of galaxies with lower than expected metallicities as was also noted in Mannucci et al. (2010). The galaxies in this tail form a physically distinct population with lower stellar masses, enhanced star formation rates and smaller half-light radii than the rest of the sample, consistent with them being merging galaxies. The existence of the tail is robust to the choice of metallicity calibration. I develop a simple model for the distribution of metallicity residuals, where mergers dilute metallicity by an amount proportional to the mass ratio of the merger. This model provides an excellent fit to the data using three free parameters pertaining to the magnitude and time-scale of the dilution and a lower mass ratio threshold. The metallicity depressions and time-scales I find are in good agreement with estimates from hydrodynamical merger simulations and observational studies of close galaxy pairs. These findings support the suggestion by (Mannucci et al., 2010) that mergers leave a signature in the FMR.