On Friday 14th of February 2014, The Niels Bohr Institute and the Nordic Optical Telescope (NOT) officially entered into a collaboration to build the NOT Transient Explorer (NTE), an instrument that will take the scientific capabilities of the La Palma- based telescope to the next level! 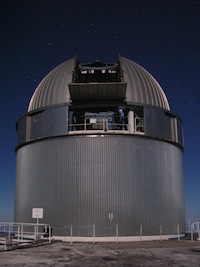 In April 2007 the Nordic Optical Telescope Scientific Association (NOTSA) announced a call for ideas for new instruments for the Nordic Optical Telescope on the Canarian Island of La Palma. Responding to this call Michael Andersen and Johan Fynbo submitted a concept for a new instrument that at the same time would allow both imaging and spectroscopy over the full optical and near-infrared spectral range. This is unlike a more typical instrument that will only cover a limited spectral range, but for the study of transient objects the constant availability of the full spectra range is crucial. The concept subsequently developed in the strategy document for the future of the NOT in 2010.

Subsequently a phase A study for the instrument was prepared and submitted to NOTSA in July 2012. After a thorough phase A review the instrument concept has been further developed and presented for approval by the
NOT Council with Johan Fynbo as principal investigator, Michael Andersen as systems engineer, Bo Milvang-Jensen as instrument scientist. Lise Christensen leads the data reduction pipeline,  and Corinne Toulouse-Aastrup is project manager. The project was approved by the NOT Council in November 2013 and now the contract has been signed. 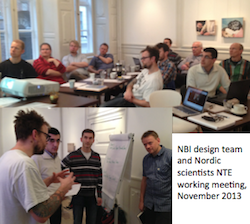 The main part of the project is designed and will be built locally at NBI by our workshop colleagues (Anton Norup Sørensen, Niels Michaelsen, Preben Nørregaard, Jeppe Jønch Andersen), and benefits from strong support from NBI, recognizing it as an investment into instrumentation that will contribute to keeping Danish astrophysics in the forefront of research. The project also requires close collaboration with our partners at the NOT. Moreover, the implementation is taking a pan-European turn with an important financial and operational involvement of INAF (Istituto Nazional di Astrofisica) in Italy. The instrument will be installed on the Nordic Optical Telescope at La Palma in 2017.

Successful efforts were made to locate funding for hardware and manpower through partners (INAF, NOT) and a Carlsberg grant was awarded to Johan Fynbo (PI) to cover most of the hardware costs of the project.  The NTE consortium keeps searching for new funding, and are talking to new potential partners of the Nordic Community. Ideally, the NTE consortium hopes to raise enough funds to be able to upgrade the current design of the instrument to also include imaging capabilities, which would then make the instrument and the NOT equal to none in the world of 2,5m telescopes.