One of the major problems in astronomy is measuring very large distances in the universe. Research from DARK shows that precise distances can be measured using supermassive black holes. The results are now published in Nature. 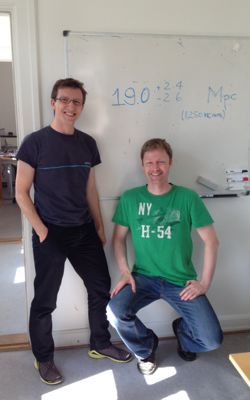 The active galaxy NGC 4151 called the, ‘Eye of Sauron’ due to its similarity to the eye in the film Lord of the Rings, is a modest spiral galaxy. It has a supermassive black hole at its centre and this black hole is still active, that is to say it accretes gas clouds from its surroundings and it is this process that makes it possible to measure the distances to the galaxy.

“When the gas falls in towards the black hole, it is heated up and emits ultraviolet radiation. The ultraviolet radiation heats a ring of dust, which orbits the black hole at a large distance and this heats the dust causing it to emit infrared radiation. Using telescopes on Earth, we can now measure the time delay between the ultraviolet light from the black hole and the subsequent infrared radiation emitted from the dust cloud. The time difference is about 30 days and because we know the speed of light, we can calculate the real physical distance between the black hole and the encircling dust,” explains Darach Watson, associate professor at the Dark Cosmology Centre at the Niels Bohr Institute, University of Copenhagen.

Read a longer description of the discorvery at NBI news