Allison Wing Shan Man successfully defended her PhD thesis "Galaxy Evolution Over the Past Eleven Billion Years: Mergers and Quiescence" on Wednesday 17 December 2014. Allison has been working at DARK with supervisors Sune Toft and Andrew Zirm. 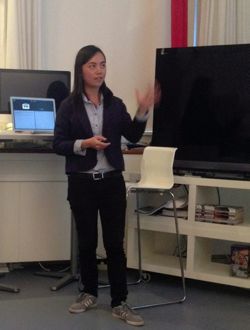 Abstract:
An intriguing population of distant red galaxies, only visible with deep near-infrared  observations, was discovered a decade ago. They are the most massive and evolved galaxies at early epochs, which have undergone a rapid build-up of stellar mass followed by a short-lived, effective phase of star formation quenching. Curiously, their stellar mass surface densities are an order of magnitude higher than their local counterparts, containing 10^11 solar masses within a radius of only 1.5 kpc. Such dense galaxies are very rare in the local Universe, therefore they must have grown significantly in size over the past eleven billion years to become present-day giant ellipticals.