Astronomers have for the first time observed a supernova (an exploding star) multiply-imaged due to gravitational lensing. The light from the supernova is seen in four different images due to a cosmic phenomenon that causes light to be deflected by the gravity of a massive galaxy. This effect creates four separate images of the same supernova. The discovery is published in the scientific magazine Science in a special issue celebrating the centenary of Einstein’s Theory of General Relativity.

Gravitational lensing works like nature’s own giant telescope. It is an astronomical phenomenon that occurs when two objects line up in relation to the Earth. The light from the more distant source, in this case a supernova, is deflected by the gravity from the source in the foreground -- here a large galaxy -- which thus acts like a magnifying glass and amplifies the light from the distant supernova. 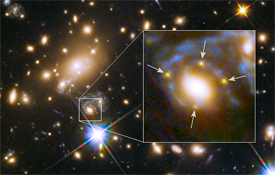 The image from the Hubble Space Telescope shows the light from a supernova, which is divided into four light representations using a ‘cosmic lens’. This is the first multiple lensed supernova anyone has ever observed and the supernova is named after the Norwegian astronomer Sjur Refsdal, who theoretically predicted this phenomenon 50 years ago. (Credit: NASA/ESA/GLASS/ FrontierSN team)

“We observe the light from a distant supernova, but what we see here is a strange and rare sight. The enormous mass has deflected the light from the underlying supernova, so the light is seen in four images configured like a cross around the elliptical galaxy. It is called an Einstein Cross after Albert Einstein, who first predicted the phenomenon of gravitational lensing 100 years ago,” explains Anja von der Linden, postdoc at the Dark Cosmology Centre at the Niels Bohr Institute at the University of Copenhagen.

“I was so excited when I spotted the four images around the galaxy. It was a complete surprise,” explains Patrick Kelly from the University of California, who discovered the supernova during a routine search as part of the project, Grism Lens Amplified Survey from Space (GLASS).

Head of the Frontier Fields Supernova team, Steve Rodney from Johns Hopkins University, explains that the four images of the supernova appeared one by one every few days over a few weeks, but they first spotted them only after all four images had appeared. 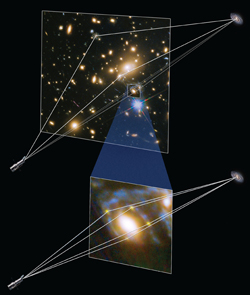 The light from the underlying supernova is deflected by the gravity of a large collection of galaxies and an elliptical galaxy, which thus acts like a magnifying glass and amplifies the light from the distant supernova. This special phenomenon, called gravitational lensing effect, works like nature’s own giant telescope and the supernova appears 20 times brighter than its normal brightness. (Credit: NASA/ESA/GLASS/FrontierSN team)

The galaxy is five billion light years away and the supernova is located nine billion light years from Earth. But there is something even more remarkable. The galaxy lies at the heart of a giant cluster of galaxies, which significantly strengthens the lensing effect. A supernova at that distance would normally be very faint, but due to its particularly favourable location, its light is amplified.

“The supernova appears 20 times brighter than its normal brightness. This is due to the combined effect of the two ‘lensings’. The massive galaxy cluster focuses the light from the supernova and produces at least three different images. One of these images’ light paths then happens to intersect with a large elliptical galaxy in the cluster of galaxies and this causes a second lensing effect that we see as the four images configured into an Einstein cross,” explains Jens Hjorth, professor and head of the Dark Cosmology Centre at the Niels Bohr Institute at the University of Copenhagen.

The space between galaxies is not just empty, it is filled with dark matter and this unusual observation can also help shed new light on this. The visible celestial bodies – planets, stars and galaxies only represent about five percent of the universe. The rest is comprised of dark energy and dark matter, but dark matter can not be seen, because it neither emits nor reflects light, but can be weighed indirectly using gravity. Since gravity corresponds to mass, that is, the weight of all of the matter in the galaxy, you can calculate the weight. The heavier the galaxy the stars travel around in, the faster the stars move. So, from the speed of the stars, you can calculate how much the galaxy weighs. Calculations of the orbits of stars in the galaxies and of the galaxies within the galaxy cluster show that the vast majority of the matter in both the galaxies and between the galaxies is dark matter.

But how does dark matter distribute itself? This is a crucial question to understanding how dark matter interacts with itself and normal matter. This unique observation will enable the researchers to improve their calculations of the amount and distribution of dark matter – both in the galaxy cluster and in the one elliptical galaxy.

When the four images fade, the astronomers will get a rare opportunity to get a backward glance at the supernova, as the current pattern with four images is only one part of the gravitational lensing phenomenon. Twenty years ago you could only see a single image of the supernova elsewhere in the galaxy cluster and calculations show that another image of the same supernova will appear again in a few years.

“The light in each image is deflected differently on its way through the labyrinth of dark matter and because of these different routes, they arrive to us on Earth at different times. By measuring the delay between the different times the light arrives, we can map the distribution of the dark matter,” explains Jens Hjorth.

Jens Hjorth, professor and head of Dark Cosmology Centre at the Niels Bohr Institute at the University of Copenhagen, +45 3532-5928, jens@dark-cosmology.dk

Anja von der Linden, postdoc, Sophie and Tycho Brahe Fellow at the Dark Cosmology Centre at the Niels Bohr Institute at the University of Copenhagen, +45 3532-0939, avdl@dark-cosmology.dk