Christa Gall receives 10 million DKK to search for 'known unknowns' in the transient Universe with a Villum Young Investigator grant. 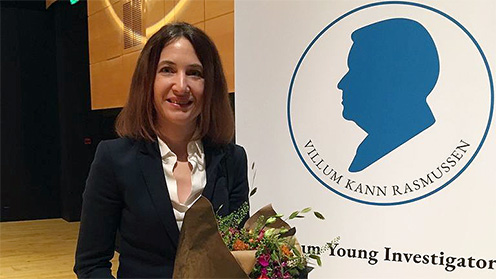 Enrico Ramirez-Ruiz, a Danish National Research Foundation Niels Bohr Professor at DARK and a Professor at the University of California Santa Cruz, stated: “Christa’s research project is in a field of strong international competition and excitement. I look forward to working with her on interpreting her new findings”. Jens Hjorth, head of DARK, added: Besides being a creative scientist, Christa enthusiastically works to support women in Science. She is a great role model in her daily research life."

Christa’s research project, “Searching for the Known Unknowns — Lightening up the Dusty Universe”, will use astrophysical transients to address fundamental questions about the Universe we live in. Astrophysical transients, such as massive stars exploding as supernovae, are the spotlights of the Universe, which is filled with small solid particles, ‘cosmic dust’, of unknown origin. I will find out if supernovae are the long sought production factories of large cosmic dust grains and quantify the properties of dust across cosmic time. The project will exploit the discovery space opened up by new transient surveys and enlighten some of the known unknowns such as the nature of hitherto unknown transients and their role in the dusty universe. The grant will fund one PhD student, one postdoc as well as interaction with international collaborators.