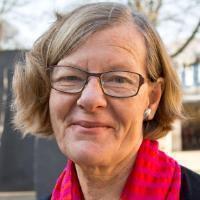 Birgitta’s research has been centered around the chemical and dynamical evolution of galaxies, using the Milky Way as a prototype. Her most-cited paper is the Geneva-Copenhagen Survey of the Solar Neighbourhood (Nordström et al. A&A, 2004), which revealed that the structure of the Milky Way disk is much more complex than previously believed.

Other large research projects focus on studying probable remnants of minor dwarfs galaxy mergers in the disk (Zenoviene et al. 2015), and on the oldest and most metal poor stars in the Milky Way halo (Cayrel et al. 2004, Bonifacio et al. 2009) and the formation of the chemical elements in the early Universe (Hansen et al. 2015).